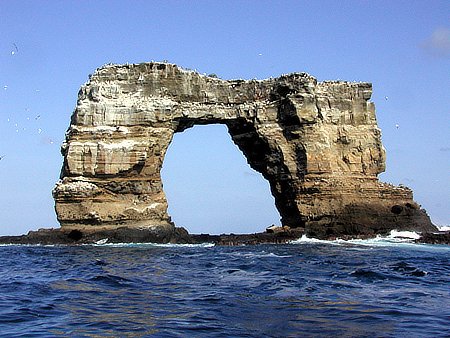 News from CNN this past week states, “One of the most famous rock formations in the Galapagos Islands has collapsed into the sea. The top of Darwin’s Arch, located in the northern part of the Pacific Ocean archipelago, fell as a consequence of natural erosion.” (Italics mine)

The instant I read that I knew it was a prophetic message from God to the world that Darwin’s unprovable theory of evolution is crumbling even now. How fitting that it would be said that natural erosion brought it down, when according to Darwin things in nature improve and get better by natural selection.

The disintegration of the Darwin’s Arch rock formation is a fitting demonstration of what happens to all things apart from God. They disintegrate. Things in nature do not gradually improve and evolve into something more complex and better. They naturally fall into disorganization and disintegration. Darwin himself said, “To suppose that the eye could have been formed by natural selection, seems, I freely confess, absurd in the highest degree.”

With this recent news in mind as I observe destructive changes happening, such as in our schools and universities, I believe our entire educational system, from K through graduate school, is falling, not just Darwin’s theory. Think about it—first evolution taught people that there is no creator God. Then it became easier to bring in other heresies like Separation of Church and State to remove prayer and Scripture reading from our schools. Stories abound of teachers losing their jobs because they had a Bible on their desk or they mentioned a scripture or prayed for a distressed student.

Gradually we turned the educating of our children fully over to the State and then it was Katie bar the door, or maybe I should say, the Devil got his foot in the door. Now they are teaching our children as young as kindergarten (or earlier!) about sex. Kindergarteners shouldn’t be thinking about sex anyway, but if they are, it is up to the parents to tell them what they want them to know and when they want them to know it. Not only are they being told about sex, but also what most of us would call sexual perversions.

This seemed about as bad as it could get until they started telling children they are not a boy or girl because of their anatomy but according to how they want to identify themselves. They can decide whether or not they want to be a boy or girl—something called sexual identification. Parents all over America are up in arms about this—and it’s not the only issue.

Now the State is shoving critical race theory down children’s throats. My niece in Georgia told me about a school board meeting in her district where three hundred parents showed up to protest the Critical Race Theory. They were able to vote it down. However, Diversity and Equity Education remains on the docket.

When children learned reading, writing and arithmetic in school, our nation was far better off than when schools began presuming and attempting to influence morals, ethics and social issues. They have claimed Christianity as a religion cannot have any influence in our educational system, but evolution, (which is also a religion), has been touted as fact based in science and therefore can be freely brought in wherever the State wants. The same with Islam. The State says it is not a religion but a culture, and therefore it is welcome in the public schools.

I don’t know if you’ve noticed, but every single nature documentary on TV always promotes the theory of evolution as they show you all the gorgeous creatures created by God in their natural habitats but without giving Him credit for anything—the creatures or their environment. Over time when we hear this over and over again in all educational venues except Christian ones, some of us begin to believe it.

In 1992, I had the opportunity to return to college, after my children were grown and away from home, to finish just three more classes I needed for my Bachelor of Arts degree. The three courses I needed were sociology, theater, and music in world cultures. Having had the maturity that comes with years, I was able to see things in my classes I would not have noticed in my younger years. In every course I was able to identify three definite agendas—feminism, sexual orientation diversity and evolution. It may not have had anything to do with the course, but they got it in there.

As we see our system of education failing at all levels, we should not be alarmed. It is something the Devil has built up and God is bringing it down so He can give us something much better. In the meantime, we need to pray consistently about what the Lord would have us do to educate our children until whatever He is bringing us is established.

After a little reading about Darwin, I have learned that he himself doubted many aspects of his own theory. There were gaps between species that could not be filled with any certainty. Darwin wrote in a letter to a friend that when he examined the details of his theory, he could not prove that any one species had changed into another. He also said that whatever supposed changes they found were not necessarily beneficial, and that fact alone brought many doubts regarding evolution. I think many of us can see that if the changes were not beneficial (which they aren’t), how could humans evolve from an amoeba in some primordial sea?  https://www.windowview.org/sci/pgs/09doubts.html

The belief in the theory of evolution paved the way for the religion of humanism to gain ground in western and Christian societies. Christianity proclaims that the God of the Bible, Jesus Christ is Lord. The humanists claim man is lord. Actually, evolution in itself is a religion because it takes a lot of faith to believe all the complexities of animals, humans, plants—in short, the wonders of creation all around us just happened over millions or billions of years. When one understands even the minutest details of the DNA molecule and its nucleotides that must be in a certain order to make a lifeform, and that if one of these nucleotides is in the wrong place the whole thing fails, then a belief in evolution is beyond credulity.

It is interesting to read the various polls taken of Americans regarding evolution vs creationism. Although figures vary somewhat, just under two-thirds believe in evolution and one third believe creation. It is easy to see that education influences our society and our society influences education such that we have come up with a vicious cycle that only God Almighty can break us out of. And that is what He is doing.

As institutions of lower and higher education fail, rather than wring our hands in anguish, let us rejoice in the certainty that God is bringing them down in order to give us something much better. In the meantime, it can be a rocky road for those of us who have children or are seeking higher education for ourselves to enhance our skills or gain job opportunities. We must daily seek the Lord for His direction, and He delights in our asking and is quick to give direction if we are open to hearing Him. And this will prepare us for what is coming. Problems, like education for example, can be opportunities to lead us into a deeper walk with God, a walk where we lean upon Him and seek Him in all things. As much as we don’t like it, our weaknesses are beneficial when we admit our own inadequacies because as the Bible says, When we are weak, He is strong.

I would like to close this article with two quotes:

“When we descend to details,” he wrote, “we can prove that no one species has changed [i.e., we cannot prove that a single species has changed]; nor can we prove that the supposed changes are beneficial, which is the groundwork of the theory. Nor can we explain why some species have changed and others have not” (Darwin 1899, 2:210). In other words, Darwin was aware that the scientific evidence was short of compelling. http://www.windowview.org/sci/pgs/09doubts.html

“How dare you question Me about My sons,
or instruct Me in the work of My hands?
It is I who made the earth
and created man upon it.
It was My hands that stretched out the heavens,
and I ordained all their host.” (Isaiah 45:11, 12, Berean Study Bible)

These two quotes make it all pretty clear. It is up to us to decide which is true.